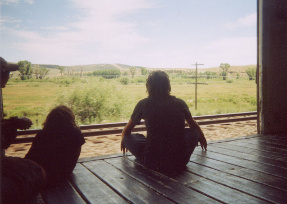 This site is a partial collection of projects I've worked on, stories I've written down, and software I've published.

In the past, I've worked as a software engineer, hacker, sailor, captain, and shipwright. I used to travel a lot; I've hopped freight trains across the US from coast-to-coast a bunch of times, have gotten some really great and some really terrible rides hitchhiking all across America, and have sailed a few near-derelict sailboats as far as I could take them. I currently live in California.

I like computer security and software development, particularly in the areas of secure protocols, cryptography, privacy, and anonymity. But I also secretly hate technology.

I like sailing, have a Master's mariner license, and used to do yacht deliveries world-wide. I'm interested in sailing without engines, and draw great inspiration from the likes of Moitessier, as well as the entire 1968 Golden Globe crew. I've spent enough time on the water to love the ocean, but also to be constantly terrified of it.

In general, I hope to contribute to a world where we value skills and relationships over careers and money, where we know better than to trust cops or politicians, and where we're passionate about building and creating things in a self-motivated and self-directed way.