To my great surprise, young people now somewhat frequently contact me in order to solicit career advice. They are usually in college or highschool, and want to know what the best next steps are for a career in security or software development.

This is, honestly, a really complicated question, mostly because I’m usually concerned that the question itself might be the wrong one to be asking. What I want to say, more often than not, is something along the lines of don’t do it; when I got out of highschool and focused on the answer to that same question, it was very nearly one of the biggest mistakes of my life.

Since I get these inquiries fairly regularly, I thought I’d write something here that I can use as a sort of canonical starting point for a response.

Tyler Durden was wrong, you are your job.

In 1971, Dr. Philip Zimbardo conducted a psychological experiment that is now popularly known as the “Stanford Prison Experiment.” He constructed a makeshift simulated prison in the basement of Stanford University’s psychology department, took a group of volunteers who tested as psychologically “normal” with no criminal background, flipped a coin, and assigned half of them to be “prisoners” and half of them to be “prison guards.” 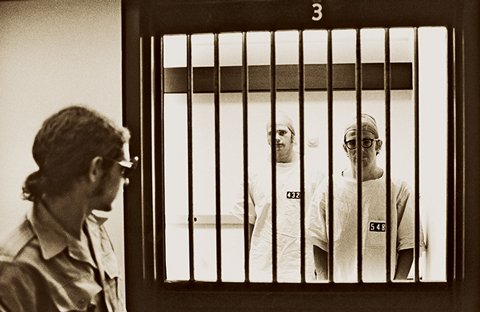 Initially, everyone acted awkwardly; the situation was so obviously foreign to their sense of self and their lived experience that they found it strange and even humorous. Fairly quickly, however, the situation eclipsed all of that. The prisoners became divorced from their former identities, and began to act from the place of being a prisoner. They alternated between staging minor protests and ratting each other out, to going on hunger strike and suffering psychological breakdowns.

The prison guards also became prison guards, even though they were allowed to return to their normal lives in between their eight hour shifts. They went so far as to invent forms of psychological punishment, create solitary confinement cells, pit prisoners against each other in order to break them, and give long speeches while slowly pacing the hallway and rattling their wooden batons across the bars of the cell doors.

Things got so out of control that the experiment, originally scheduled for two weeks, had to be ended after six days.

The experiment was positioned as a comment on institutions, but the simpler lesson I draw from it as an individual is just be careful what job you take, because your job will change you.

This is obviously true for these types of hyperbolic examples — it’s not hard to imagine that a customs agent (who spends 40 hours a week looking suspiciously at people, thinking skeptically about the honesty of what people say, scientifically observing people’s eye movement, and trying to trip people up with confusing questions) might approach a conversation with someone they’ve just met at a party differently than they would have before taking the job.

The choices we make.

I recently got around to reading Aaron Cometbus’ enjoyable “Cometbus #54, In China With Green Day?!!” One of my favorite quotes was:

Some things are like that—they strike you as repugnant for instinctive reasons, probably having to do with your culture and the way you were raised. The French word “gauche” comes to mind, but I preferred the Hebrew word “treyf.” Literally, it means not kosher, but I also use it to describe things like cars, bars, strip clubs, guns, dogs, rock-n-roll, and football games. Things that are treyf, you avoid, not because you hate them per se, but because in avoiding them you keep yourself from becoming like the people you hate.

The concept resonates with me for the same reasons. Like Aaron, I have my own list of things that are treyf, not because I find them necessarily unenjoyable, but because they add up to something that I ultimately dislike.

For instance, whenever I get on an airplane and walk past first class, I inevitably go through a familiar mental process. First, I’m envious. The passengers are already in their comfortable seats, drinking from champagne flutes, contemplating the moment after takeoff when they can recline into their cocoons and watch a movie of their choice on demand.

But then, I register who is sitting in those seats. It’s usually almost all predominantly unhealthy looking middle-aged white men, who it is clear from a glance have spent literally hundreds of hours of their lives over the past year in these airplanes. And suddenly, I’m glad that I’m not sitting there.

Those seats are treyf for me, not because I don’t envy extra leg room, but because I don’t envy the people sitting in them. There’s a reason the bulk of the first class passengers resemble each other, just as there’s a reason prison guards tend to act the same. I know that by making choices designed to land me in the first class cabin, it would be difficult to avoid also inheriting the dreariness associated with its current occupants.

The future is looking back at you.

In the context of a career, these concepts make it simple to look into the future. Jobs at software companies are typically advertised in terms of the difficult problems that need solving, the impact the project will have, the benefits the company provides, the playful color of the bean bag chairs. Likewise, jobs in other fields have their own set of metrics that they use to position themselves within their domains.

As a young person, though, I think the best thing you can do is to ignore all of that and simply observe the older people working there.

They are the future you. Do not think that you will be substantially different. Look carefully at how they spend their time at work and outside of work, because this is also almost certainly how your life will look. It sounds obvious, but it’s amazing how often young people imagine a different projection for themselves.

Look at the real people, and you’ll see the honest future for yourself.

Be careful not to discover a career before you’ve discovered yourself.

This all presupposes we’re starting from a point where considering these questions is a real possibility. Sure, pure objectivity is impossible; after all, society itself also defines the context of our thoughts, and by now it’s way too late to effectively remove ourselves from that. So how can we evaluate what experiences we want for ourselves, when it is experiences themselves which transform our very desires?

At the moment when young people are considering their career strategy, they have typically made all of their life choices completely within supporting structures. Even having worked hard to get where they are, and even though things like class and race can mean that some have the cards stacked against them, it’s rare for young people to have substantially departed from supporting frameworks. Highschools have “college counselors” (not “dropout counselors”), scholarships and financial aid packages lead in a single direction, and university overlaps with internships — which then culminates largely in a series of “career fairs.”
There is a tremendous amount of support for these decisions, and very little support for making any deviating choices.

When we arrive at the ends of these funnels, it’s possible that the direction we’re facing is more a reflection of those structures than it is a reflection of ourselves. Self-determination in a moment like that can’t simply be about making a choice, it has to start with transforming the conditions that constitute our choices. It requires challenging the “self” in “self-determination” by stepping as far outside of those supporting structures as possible, for as long as possible.

This is necessarily terrifying. I think a lot about a quote from Alfredo Bonanno, an anarchist and habitual bank robber, on the feeling of leaving prison:

The instant you get out of prison you have the sensation that you are leaving something dear to you. Why? Because you know that you are leaving a part of your life inside, because you spent some of your life there which, even if it was under terrible conditions, is still a part of you. And even if you lived it badly and suffered horribly, which is not always the case, it is always better than the nothing that your life is reduced to the moment it disappears.

I know that the most significant and meaningful periods of my life have all been moments that I could have never rationally chosen or even known as possibilities had I not been foolish or lucky enough to step into the nothingness that Alfredo Bonanno writes about. I try to remind myself that if leaving prison is scary, the same is likely true for any genuine process of discovery.

There’s no rush to get started early on a never-ending task.

Everything before a career has defined beginnings and endings. Elementary school, middle school, junior high, highschool, university. There’s always been a predefined end, and that contributes a lot to making the indignities of those institutions bearable. Once you start working full time, though, it’s just One Long Semester that you’re expected to attend for the rest of your life.

So consider caution if you’re overly excited to start down that road as quickly as you can. Other than being forever, it’s not as different from what’s come before as you might imagine.

By way of an explanation.

This is all just to explain why, when people write me for career advice, I’m as likely to respond with something like “if I were you, I’d hitchhike to Alaska this summer instead.”

My career advice usually falls within the framework of doing the absolute minimum amount of work necessary to prevent starvation, and then doing something that’s not about money, completely outside of supporting structures, and not simply a matter of “consuming experience” with the remaining available time.

Learn three chords, start a band, and go on tour. Ride a bicycle as far as you can. Go WWOOFing or start a community garden in your neighborhood. Put together a traveling puppet show. Build a drone to engage the emerging drones controlled by domestic police. Do whatever — but make it uncomfortable (like leaving prison!) and make it count.